Diptera basically stands for “two-wings” in Greek. Members of Diptera possess a pair of wings plus a pair of halteres evolved from the hindwing. Halteres are knob structures that help flies stay balanced during flight. Most flies have two large and prominent compound eyes.

Read on to learn more! 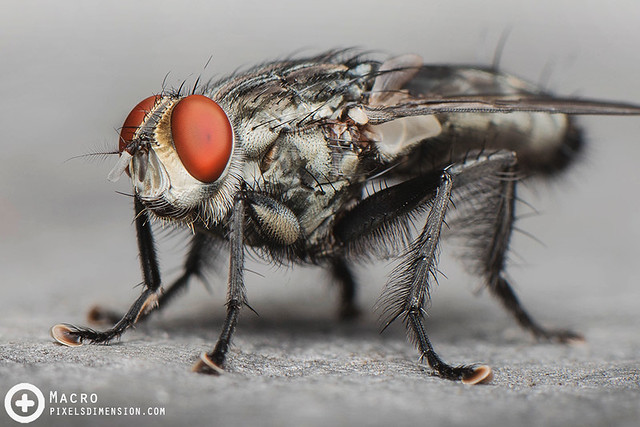 #1. A Common Flesh Fly (Sarcophagidae). These flies are large, hairy and fast-flying, often found around compost piles and litter. They are also known to develop their eggs within the abdomen and giving birth to newly hatched maggots. 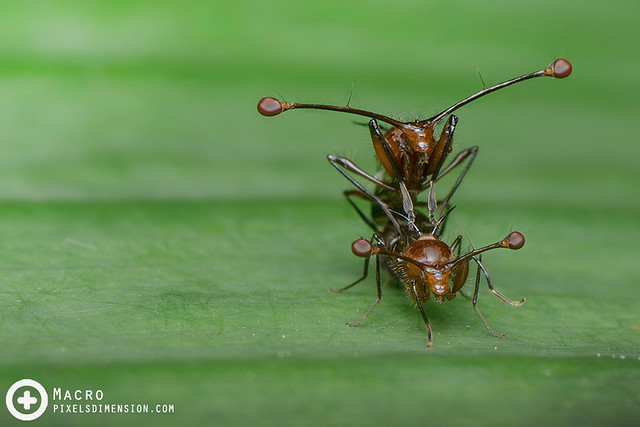 #2. Stalk-eye Flies (Teleopsis sp.) mating. Not all flies have their eyes directly on their heads! Male stalk eye flies (on top) boast their “manliness” by growing their eye stalks as long as they can. Having a long eye stalk means lower manoeuvrability and thus higher chances of getting preyed upon- the surviving ones are often the most competitive and thus, get the females. 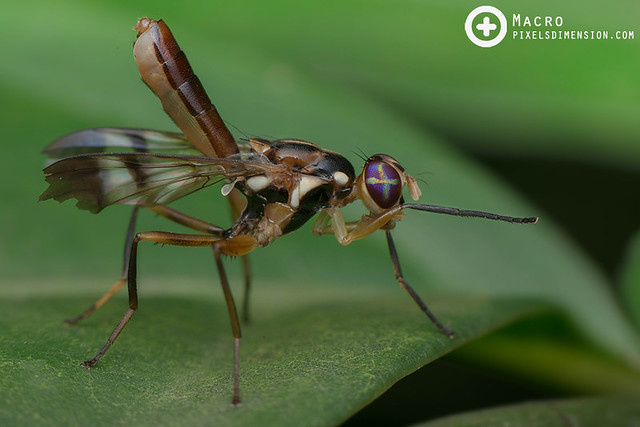 #3. An Adrama fruitfly. This particular fruitfly is mimicking a wasp by lifting its abdomen and pointing one of its forelegs forward to deter predators. This behaviour is seen in Stilt-Legged Flies as well. 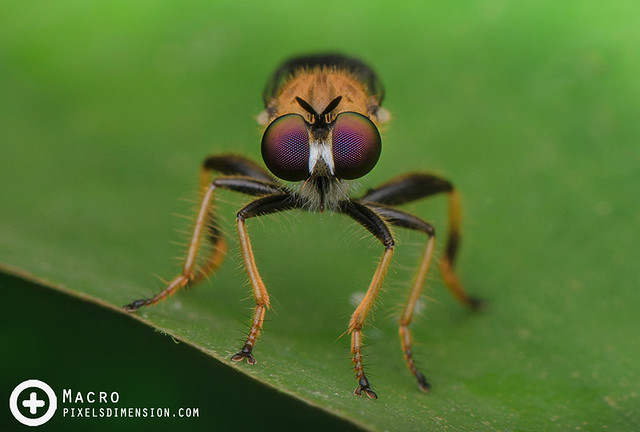 #4. A yellow Robberfly. Robberflies are a great favourite to many macro photographers because of their big, colourful eyes. These ferocious, meat-eating flies are some of the best fliers out in the insect world, and are known for being able to puncture preys mid-flight! 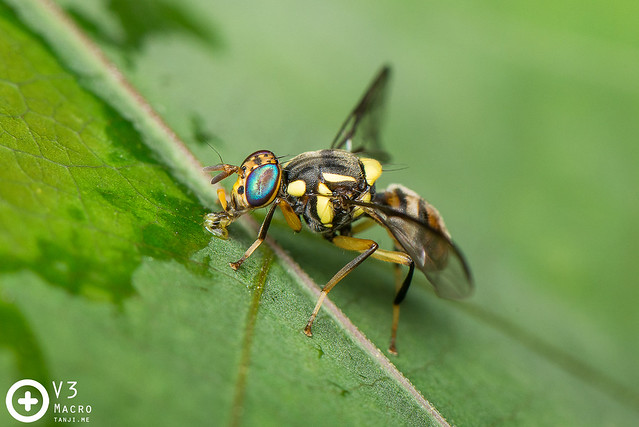 #5. A Bactrocera fruitfly tasting some pheromone. Colourful as they may be, fruitflies are one of the world’s greatest pests, capable of destroying entire fruit and vegetable industries if uncontrolled. Fruitfly maggots are white in colour and can be found in fruits and vegetables. 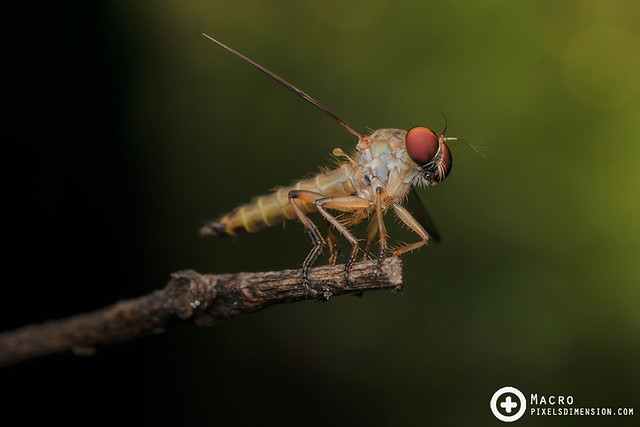 #6.  A Robberfly ready for take-off. This particular type of Robberfly leaves its wings in an “opened” position while resting, and it certainly looks like it is going to lift off, probably to hunt down the mosquitoes surrounding me! Note the small protrusion below the wings? Those are called Halteres (occur in pairs) which help flies to maintain balance during flight. Halteres evolved from hindwings. 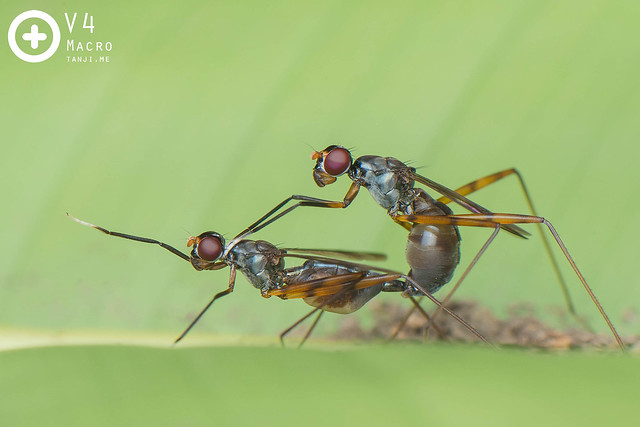 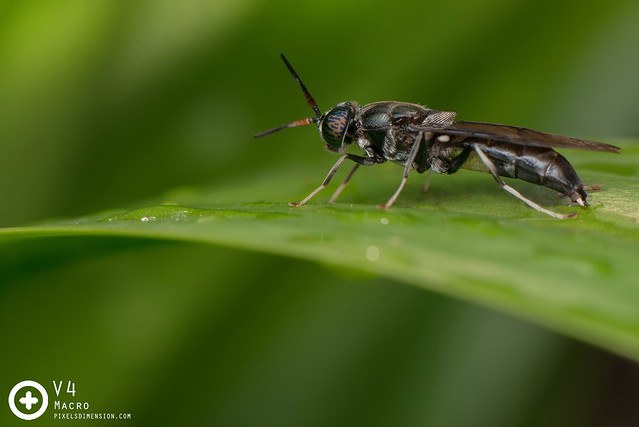 #8. A Black Soldier Fly (Hermetia cf. illucens). Don’t be fooled by the white coloured “windows” at the bottom of the abdomen, those were meant to make the Soldier Fly look like a wasp. Soldier Flies are not harmful and in fact, are quite the opposite. Soldier Flies do not have a mouthpart to feed, meaning that once they turn into adults, they only focus on mating and reproducing…. on an empty stomach! Poor things… 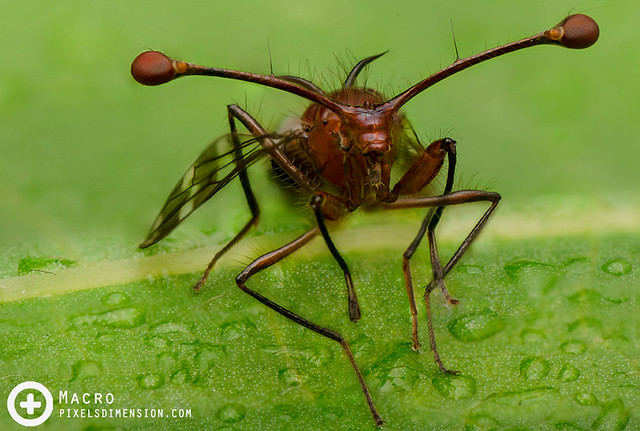 #9. Upclose shot of a Stalk-Eyed Fly (Teleopsis). The long stalks are often a burden to these flies, and slow them down greatly during flights. These flies are rather localized to a particular area, often near the leaves of certain plants. 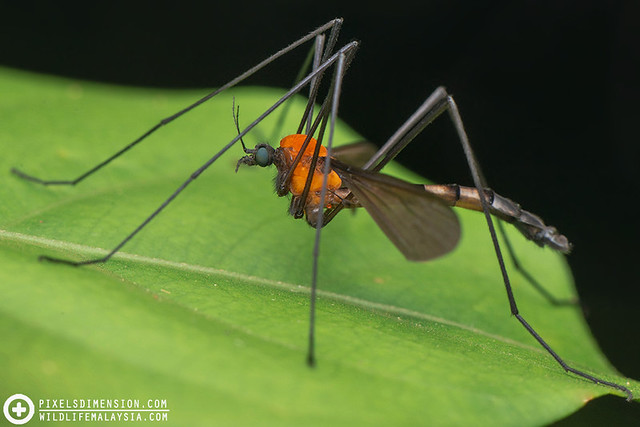 #10. An adult Crane Fly. Crane Flies are medium to large-sized flies that pretty much look like oversized mosquitoes. Known commonly as “Mosquito Lion” or “Mosquito Hawk”, adult Crane Flies don’t actually hunt mosquitoes; in fact, they do not eat at all. Adults only have 10-15 days to mate before dying. 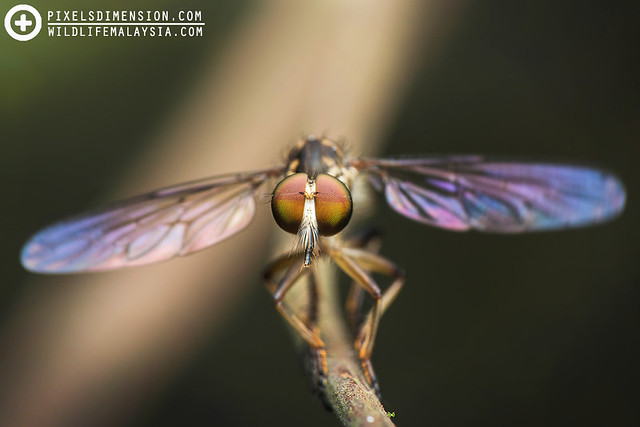 #11. A robberfly about to lift off, probably shocked by the sudden burst of flash light. Robberflies are efficient, agile hunters that are so great that they are able to pierce through prey with their sharp proboscis in mid-air! 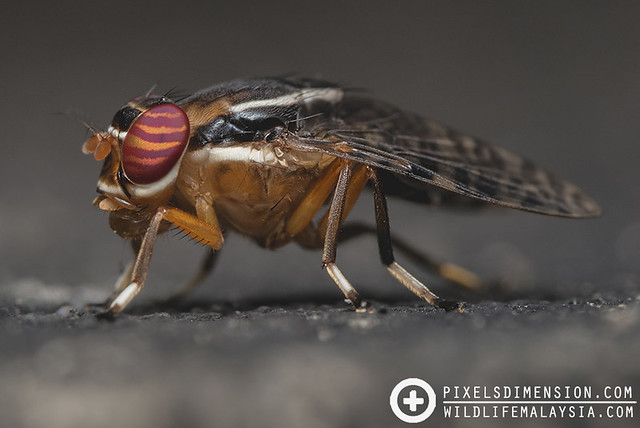 #12. A Signal Fly (Platystomatidae). Signal flies are easy to identify due to their colourful and bizarre eyes which come with “wavy ” patterns. These flies are attracted to plant material or decomposing organic matter. 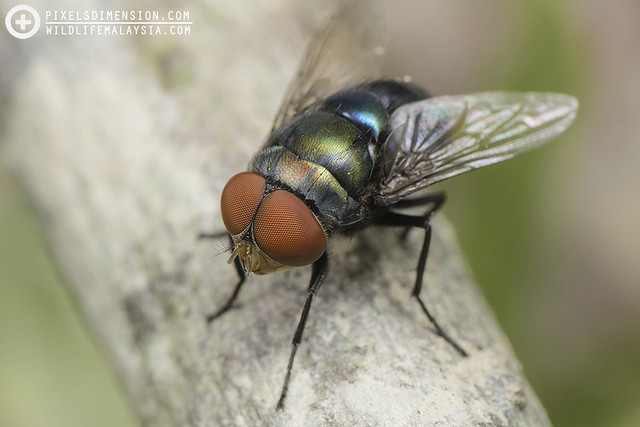 #13. A metallic, greenish-blue Blowfly (Calliphoridae). Blowflies are very common around areas with dung or rotten materials, and can be easily recognized by their shiny metallic body parts, and large red eyes. Fast, agile and relatively strong for the size, blowflies make difficult preys to catch. 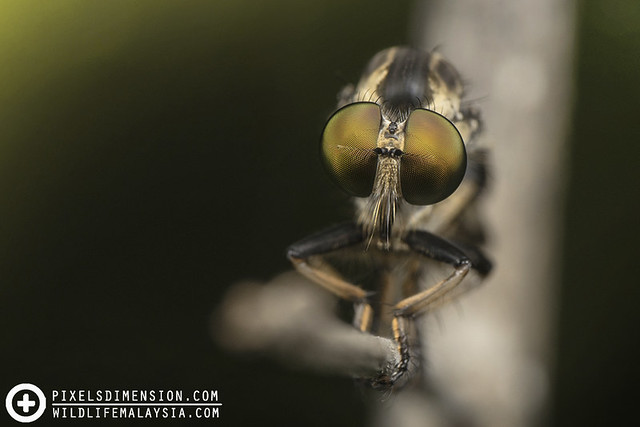 #14. A perching Robberfly (Asilidae). Robberflies have two compound eyes and three simple eyes (ocelli), allowing them to see precisely the location, distance and trajectory of the flying prey before lifting off and piercing them mid-air! Robberflies also have “moustaches” that make the look more awesome while doing their thing! 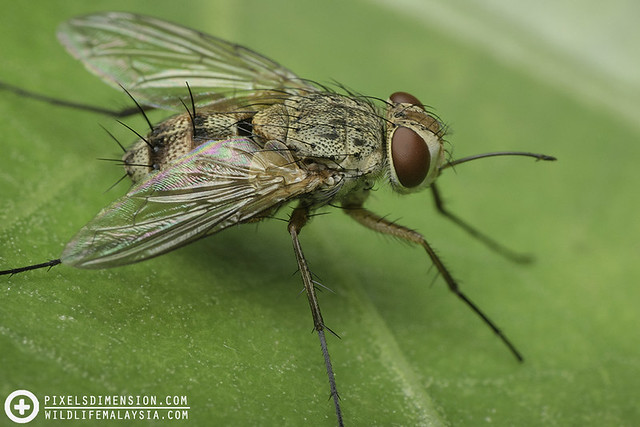 #15. A Fly extending its proboscis. It is reported that the extension of a proboscis in Drosophila is associated with brain movement. I wonder what this fly was thinking about, if it was thinking at all!