Spiders within the family Nephilidae spin webs like normal Orb Web Spiders (Araneidae), but the webs are often larger, asymmetrical and specialized with extra features. Nephila spiders are undoubtedly the most popular of this group because of their menacingly large sizes! Webs of large females can be up to a few metres across, and are strong enough to trap large preys like locusts, large butterflies, moths and even tiny bats and birds! Eager to learn more about these special Orb Web Spiders? Please read on! 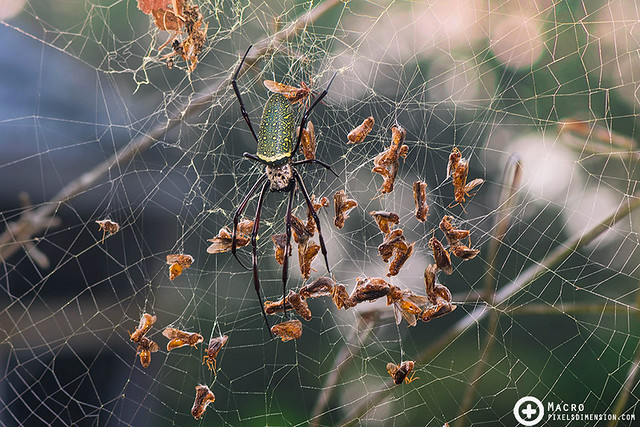 #1. A Batik Golden Web Spider (Nephila antipodiana ♀) at the centre of her web surrounded by plenty of immobilized termite flies (food). This species of spiders are very huge in size (easily more than 10cm) and builds extremely large webs that hang a few metres across. And as you can see from this photo, they have a huge appetite too! 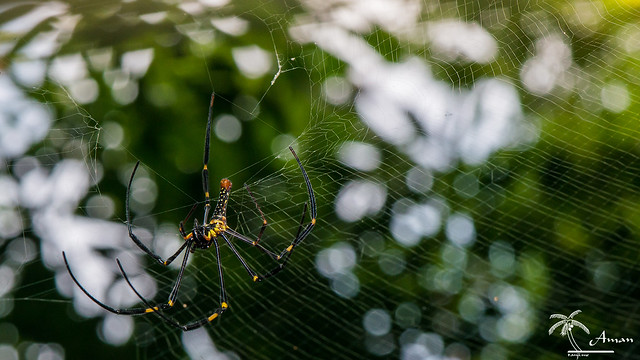 #2. A female Giant Golden Web Spider (Nephila pilipes). These large spiders are very common in gardens, forests, parks etc. and are very hard to miss due to their body sizes and extensive webs. When disturbed, Nephila spiders will try and run for cover under nearby leaves instead of falling to the ground and “playing dead” like most orb-weaver (Araneidae) spiders. 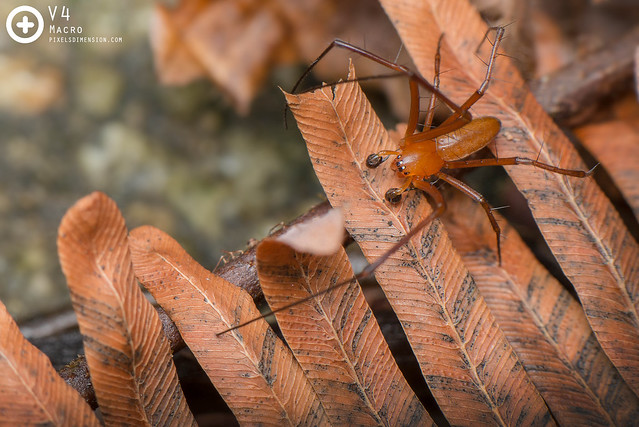 #3. A male Nephila pilipes. Male Nephila spiders are very small as compared to the females (up to 10 times smaller). They are also quite similar to one another in terms of appearance and are hard to differentiate from one another, unless if you see them hanging around or mating with a female Nephila (which is easier to ID). 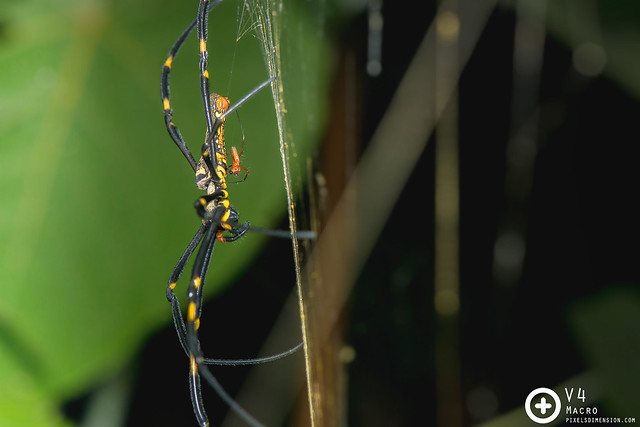 #4. Mating between a male and female Nephila pilipes. As you can see, the male is extremely small compared to the female. Because of the size difference, the male has to be extremely cautious when approaching the female to avoid being mistaken as food- they usually do so when the female is occupied e.g. eating! 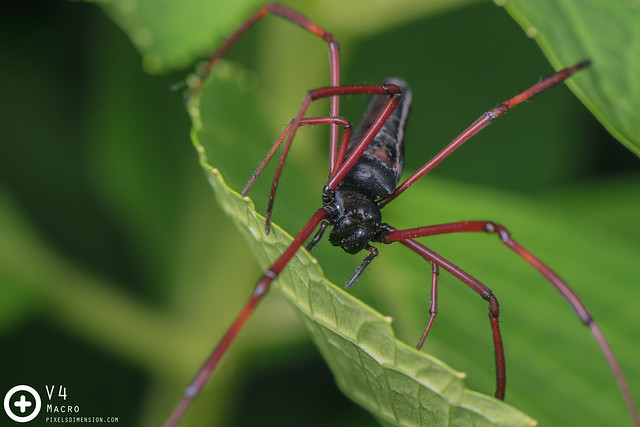 #5. A “Blackwood” Orb Weaver Spider (Nephila pilipes). It is long been suspected that Nephila cf. kuhlii is actually a melanic form of Nephila pilipes (photo #2 and #4), although the reason under this change is not really understood. 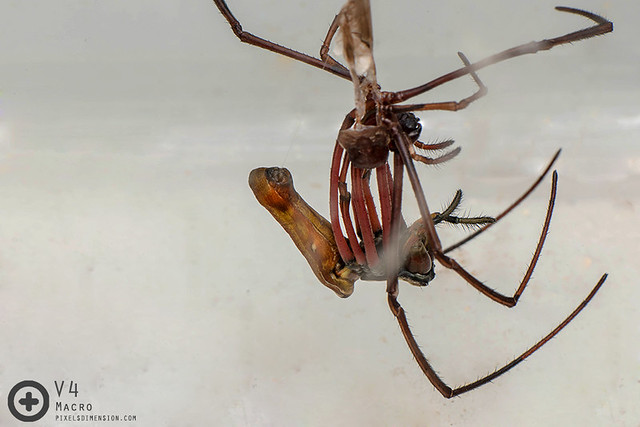 #6. A female melanic Nephila  pilipes moulting. The spider tries to slip out of her old skin by wiggling her body and legs, the actual skin shedding process (ecdysis) usually takes around 30 minutes to an hour. 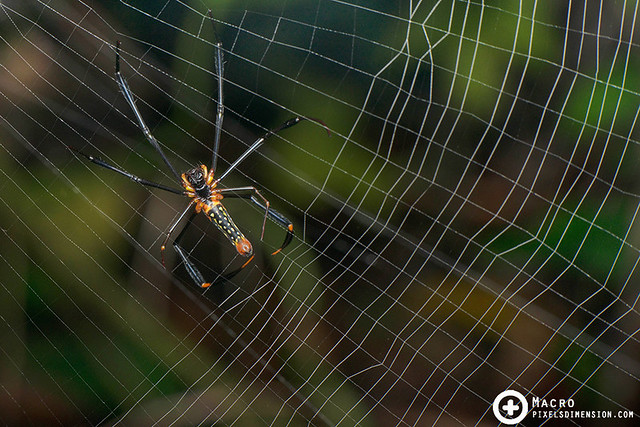 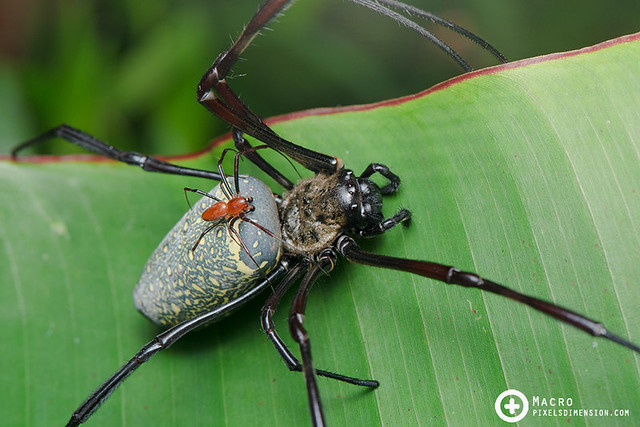 #8. A pair of Batik Golden Orb Spiders (Nephila antipodiana ♂♀). It is fairly easy to spot a male spider on a female Nephila’s web regardless of species, this is because the sneaky males (in red; top) are always trying to get the opportunity to mate with the female (without being eaten, of course!) to ensure the survival of the species. The males don’t always just climb onto the underside of the female’s abdomen to mate (as in #4) since it is quite risky for him to do so. Instead, he will stop at the top of the female’s abdomen and wait for his opportunity. 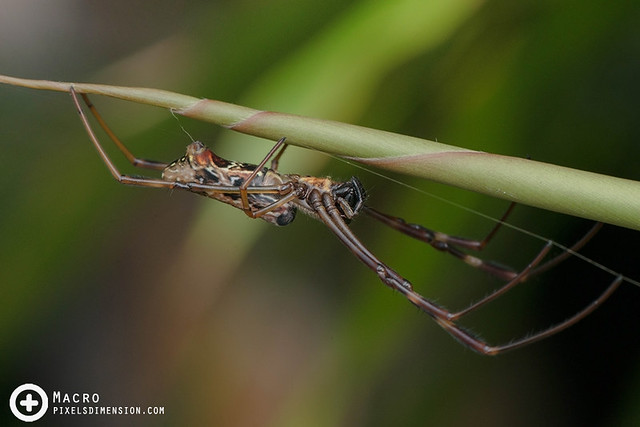 #9. A young female Nephila antipodiana is very fast and agile due to the smaller size. As it grows larger, it will become bogged down by their size and weight (photo #1). Nevertheless, being very large and scary has its advantages, since large spiders no longer have to worry too much about the smaller predators. 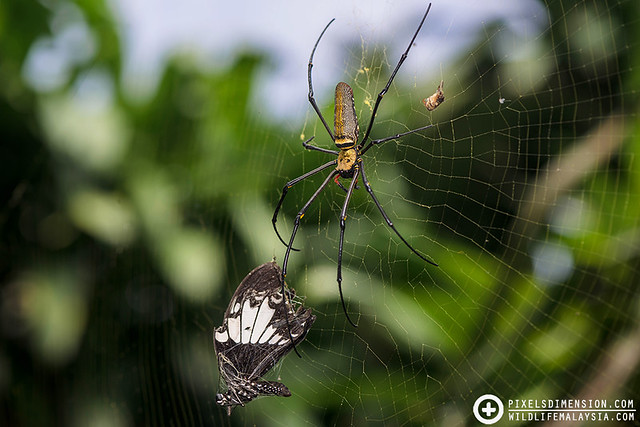 #10. A female Giant Golden Web Spider with a butterfly prey (Nephila pilipes)….. and she’s not even at her largest form! The large Common Mormon Butterfly as scale. Nephila pilipes are the most common and obvious giant web-building spiders around Southeast Asia. They are so successful probably because of the tiny males that are capable of easily distribute to other places by air; and the large females that are pretty much undisputed in the world of arthropods. 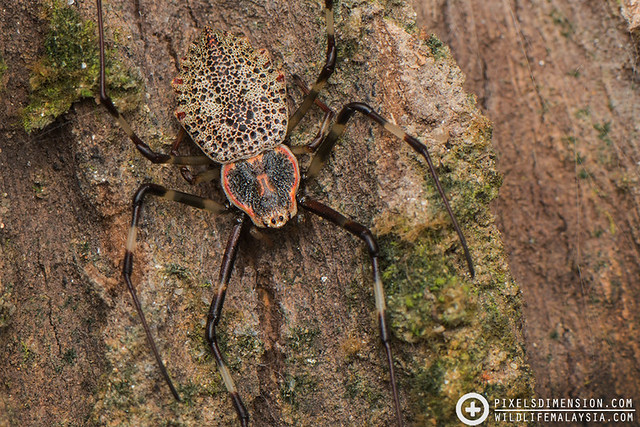 #11. A female Ornamental Coin Spider (Herennia multipuncta). The Ornamental Coin spider can be found mostly on tree trunks, although they may sometimes be found on walls of buildings near forest fringes. To me, these spiders are some of the most bizarre-looking spiders out there! With the unique crown-shaped abdomen and bright pinkish-orange colours; these spiders are sure to grab your attention, if you can notice them! 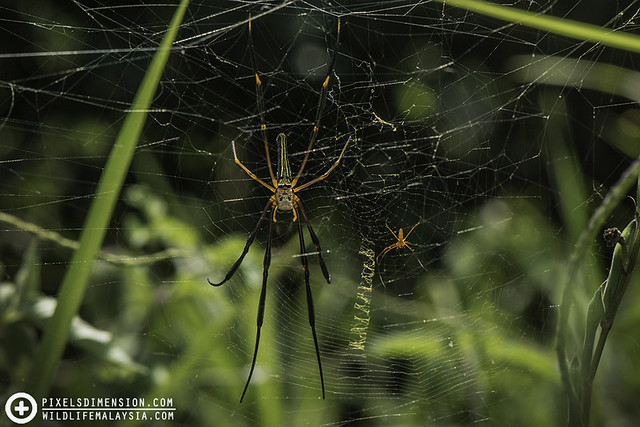 #12. A Giant Golden Web Spider (Nephila pilipes) couple resting on the female’s web. Although most of the time Nephila pilipes do not build stabilimentum (the zig-zag structure on the web), it seems that when the web is exposed, or built on moving structures (as for this case, lalang), the spider will resort to building this specialized webs for support.

** Identification of the subjects in this page are tentative and should be taken with a pinch of salt. ** All photos shown on this page were taken by Tan Ji. Please do not use or copy these photos without permission. However, I welcome interested users to read Images- Terms of Use for more details.